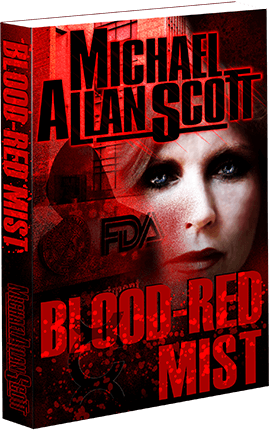 At the curb, Jena Halpern faces the broad driveway. The masonry walls of the hospital tower behind her, shadowed by a thick blanket of night. Watching Felix’s Fusion pull away, she tightens her grip on the carry-on handle, fearful of what awaits.

When she took his call early this morning, she didn’t recognize the area code. And Holy Temple Hospital in the caller ID was no help. Jena thinks she should have known it was him, but it was the last thing she was expecting. She finds it peculiar that when it comes to friends and family—the more mundane aspects of everyday life—her heightened perceptions abandon her. Even more so, now.

Jena turns and walks to the entrance, the automatic doors yawning wide at her approach. Jim Wayland, the memories that name holds. She lost contact with her stepfather years ago. Jim attended her mother’s funeral. A couple phone calls since. Then nothing.

Heading to the admittance window, Jena strides across the travertine lobby, her carry-on in tow. When Jim’s calls stopped, she told herself she understood. His work as an enforcement agent with the State Department’s International Narcotics bureau kept him out of the country. He warned her, telling her he would call when he could, but that much of his fieldwork was covert. Back then, she considered him lucky, able to bury himself in his work. She never had that luxury, the wounds from her mother’s passing too deep, too painful. Now, to come here at his request, opens all those wounds afresh.

James A. Wayland – Room 456. Jena heads for the elevators. At fifty, he’s too young. A crush of reasons jam her thoughts: Some kind of accident? Maybe a disease contracted while abroad. Wasn’t he stationed in South America? Could be something like malaria, or… a gunshot wound, a bust gone wrong. He sounded weak on the phone but hadn’t bothered to explain.

Stepping out of the elevator, a wistful smile crosses Jena’s lips. Her stepdad, a federal drug enforcement agent. Her mom, dead from an overdose of OxyContin. Ironic.

Jena stops, immersed in the hush of an antiseptic hall. She finds herself staring at a large oaken door varnished to a high sheen. A polished metal plaque reads 456. She struggles to get a sense of him, wondering why her ESP fails her at times like these. Reaching, her hand flutters. She hesitates, then takes a deep breath and pushes through.