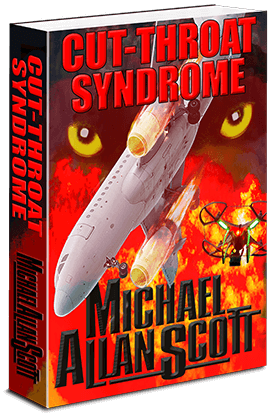 “CUT-THROAT SYNDROME . . . clear as a bell, hitting hard and fast, and will satisfy readers looking for a gritty thriller . . .” – IndieReader

She sells resale homes during the day. By night, she runs a non-profit for missing children. He takes pictures, sometimes of the dead. He also freelances as a psychic police consultant. They work as a team with a close-knit group of friends, stepping up, bringing professional expertise and personal experience.

Sao Paulo: the port engine of a Chinese airliner inhales a drone packed with explosives. The hacker cult claiming responsibility warns of more. Phoenix, the next day: a psychic leads a homicide detective to the headless corpse of an unidentified teenager.

It’s no ordinary murder mystery/international conspiracy/action thriller. Outside the box of King and Koontz, it’s the fourth in a new breed of mystery thrillers. As seen on NBC, it’s dark, different.

Read an excerpt from Cut-Throat Syndrome